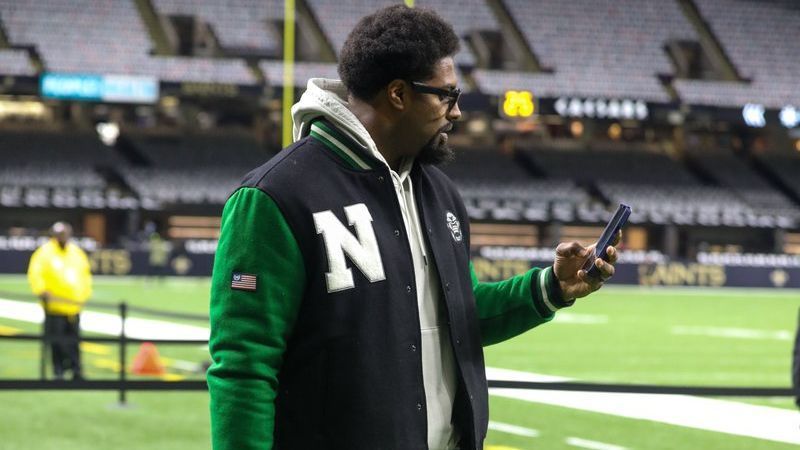 Week 9 of the NFL kicked off with the end of daylight saving time, which meant an extra hour of planning outfits, right?

With November officially underway, the fall ‘fits were abundant — in the cities starting to get cold, of course. Yes, we are getting jealous of Florida weather this time of year. The jackets! The jeans!

But on the way to the field, there are still questions to be answered. What will the Cleveland Browns be like without Odell Beckham, Jr.? Can the struggling Kansas City Chiefs take advantage of a Green Bay Packers team without Aaron Rodgers? Lamar Jackson has only lost twice when starting against a new team, so what will happen when his Baltimore Ravens host the Minnesota Vikings?

Let’s take a look at some of our favorite fall-inspired outfits in Week 9.

You can tell these guys spent all of 2021 prepping their closets so the second it got colder they could really start dressingin’.

Yes, we know we gave Florida some warm-weather props, but Shaquill Griffin was working a turquoise crewneck for his Jacksonville Jaguars home game against the Buffalo Bills.

The Jaguars will have their hands full against Bills quarterback Josh Allen, but if the sweater is any indication, the cornerback may have himself a good game.

Jeremy Chinn has been giving a nod to Carolina sports legends in all of his pregame outfits so far this season.

Sunday’s game at home against the New England Patriots was no different for the Carolina Panthers safety, who donned a NASCAR racing suit in a nod to Dale Earnhardt Jr. Born in Kannapolis, North Carolina, Earnhardt retired in 2017 with 26 wins in the Cup Series.

The arrival of Lamar Jackson and Marquise Brown together is the definition of “friendship goals.” Is that a restaurant to-go bag and orange juice? We hope these two got breakfast together on their way to the game.

Jackson is in a full Gucci outfit from beanie to shoe. And Brown is rocking a throwback Jackson jersey from when he played at Louisville, where he won the Heisman Trophy in 2016. Their Baltimore Ravens host the Minnesota Vikings.