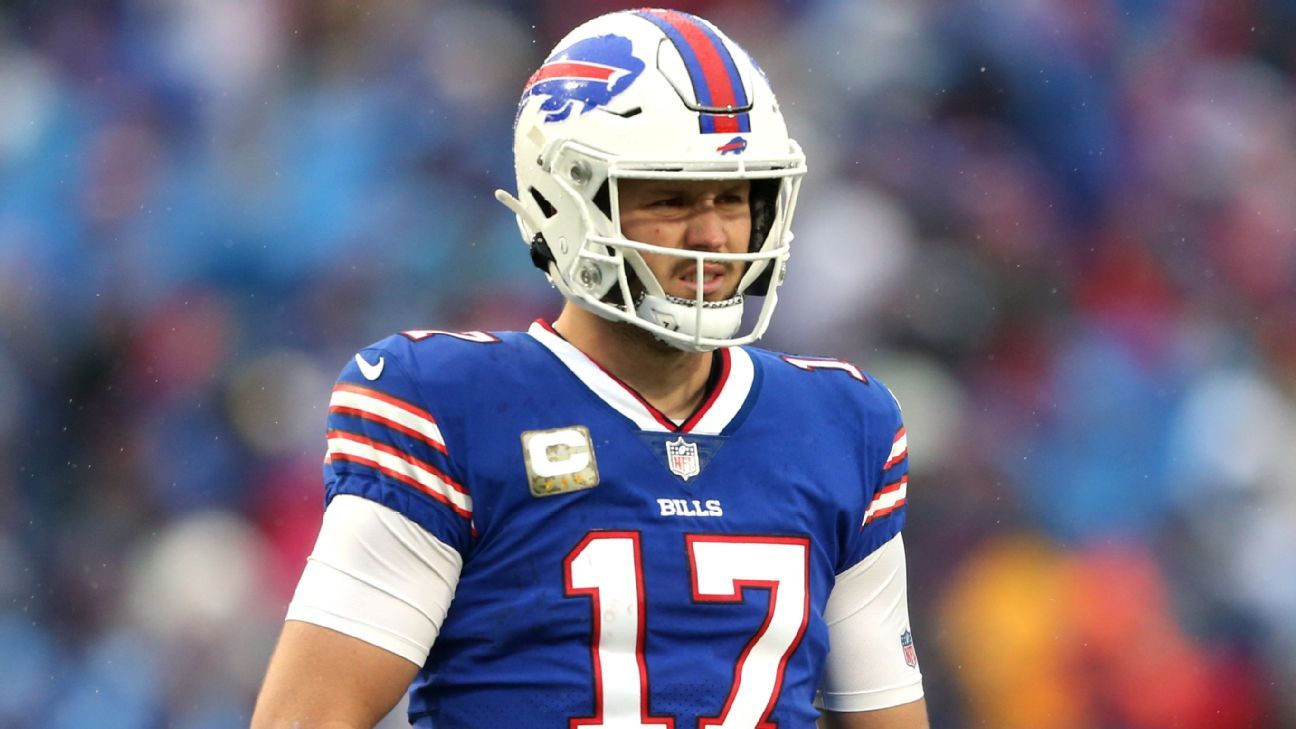 ORCHARD PARK, NY — After the Buffalo Bills’ 9-6 loss to the Jacksonville Jaguars two weeks ago, quarterback Josh Allen emerged for his postgame news conference red-faced and using strong words to describe his own performance.

Allen had a different energy after Sunday’s 41-15 blowout loss to the Indianapolis Colts. There was time to process this one on the field — Allen was pulled with 6:17 to go with the game well out of hand — and yet little time to let strong emotions linger with the Bills playing at New Orleans on Thursday night ( 8:20 pm ET, NBC).

“One thing led to another today, I think, on all three phases of the ball,” Allen said. “Starts with us taking care of the football and we didn’t do that today. It’s a terrible feeling, but at the same time, we’ve got to play Thursday, so this one’s got to be out of our system before tomorrow.”

Allen completed 21 of 35 passes for 209 yards, two touchdowns and two interceptions. The offense had the ball for only 22 minutes and 13 seconds, thanks to a rough defensive effort that featured zero takeaways. Plus, Allen was 2-of-8 with two interceptions on throws 15 yards or more downfield.

What’s worse, the Bills (6-4) have fallen a half game behind the New England Patriots (7-4) in the race for the AFC East crown.

Now the Bills face the Saints (5-5) in a Thanksgiving night road matchup in four days. The Saints are dealing with issues of their own coming off a 40-29 loss to the Philadelphia Eagles and are missing several offensive starters due to injury.

It presents an opportunity for the Bills to rebound, but they haven’t been able to stack wins since prior to the bye.

“You learn a lot from games like this, but we’re going to get right back in the film room and get ready for Thursday,” tight end Dawson Knox said. “I think it’s good to have a game coming up quick so we can get that bad taste out of our mouths.”

After the short week, the first of two meetings against the Patriots awaits on Monday Night Football, and oh yes, a game against the defending Super Bowl champion Tampa Bay Buccaneers is right after that.

Get an unprecedented first-hand account of each of Tom Brady’s Super Bowl appearances. Sign up now to stream Man in the Arena: Tom Brady on ESPN+,

There are still seven games remaining in the Bills season — with three of the last four taking place at Highmark Stadium — but the margin for error has mostly disappeared. With two games to play against the Patriots, the division is still very much in play. ESPN’s Football Power Index still gives the Bills a 63% chance to win the division.

New England has its own tough matchups with games against the Titans and Colts splitting up the meetings against Buffalo. The Patriots also have a bye week and then a softer ending to the season against the Jaguars and Dolphins, while the Bills’ last two games are against the Falcons and Jets.

New England has also fared better against the conference (5-1), but already has one loss in the division.

When looking at the conference playoff picture as a whole, 12 teams have five wins or more. As of Sunday night, the Bills sit in the seventh and final playoff seed ahead of Sunday Night Football thanks to a less than ideal 5-4 record against AFC opponents.

It’s still tough to determine just how good the Bills really are. Per FPI, they entered Week 11 having played the easiest opponents in the NFL in terms of strength of schedule.

Thanks to the recent resurgence of the Kansas City Chiefs, the only truly impressive win the Bills can hang their hat on is the 38-20 win in Kansas City over a month ago. Four of the Bills’ six wins have come against backup quarterbacks.

But they’ll get a better idea of ​​how good they are soon: The Bills’ remaining strength of schedule coming into Week 11 was ranked twelfth-hardest in the NFL. That’s not to say the Bills’ strong performances from earlier this year should be thrown away — far from it. They just haven’t yet lived up to the high expectations for the team coming into the season.

Buffalo was beaten on both sides of the line against the Colts — including giving up 264 rushing yards — and didn’t have starting defensive tackle Star Lotulelei (COVID-19), right tackle Spencer Brown (COVID-19) or linebacker Tremaine Edmunds (hamstring). All of their statuses are unknown for Thursday.

The Bills have struggled to establish any consistency on offense, while the league-leading defense has fallen flat against the league’s best rushers and even special teams has become unreliable. While the team continues to say things will come together, they still have work to do in all three phases with time running out but chances ahead.

“It’s a journey every season, and it’s going to ebb and flow. That to me is part of the challenge, and I love that challenge to be honest with you,” coach Sean McDermott said. “Not that you want to lose, but making those adjustments to get our team exactly where it needs to be and learn who you are as a team and then we can continue to grow and move forward. We’ll see where we are after Thursday night.”