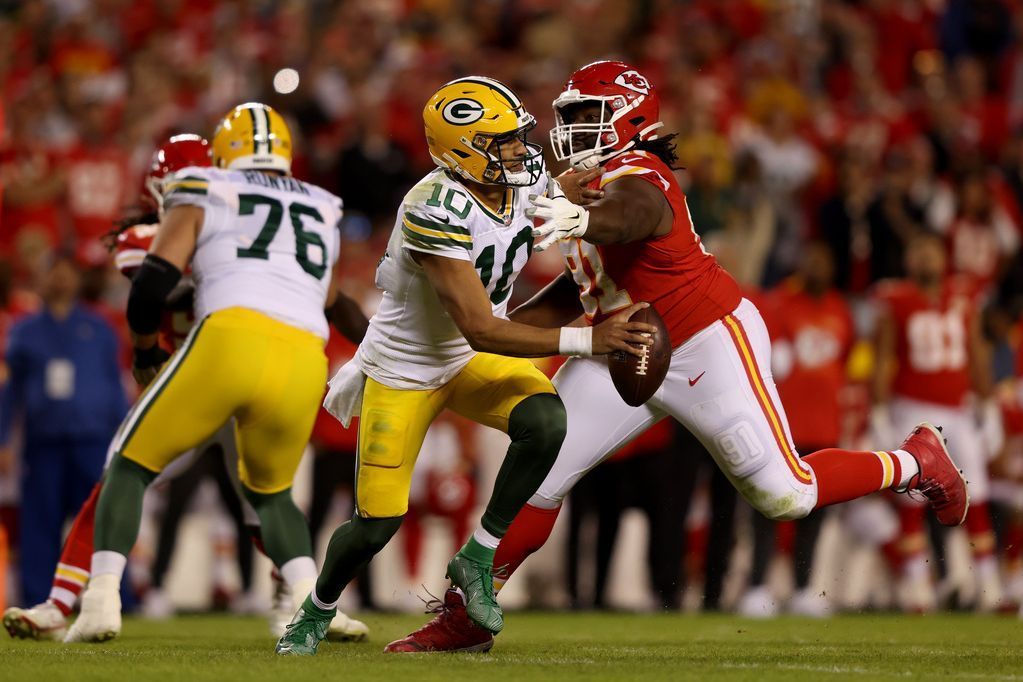 KANSAS CITY, Mo. — Jordan Love started slowly, struggled against the blitz and managed just one touchdown in his first start as the Green Bay Packers’ starting quarterback. But coach Matt LaFleur took the blame for the 13-7 loss to the Kansas City Chiefs at Arrowhead Stadium.

With Aaron Rodgers at home because of his positive COVID-19 test on Wednesday, the Chiefs threw myriad blitzes at the Packers’ first-time starter — most of them on third and fourth downs — and they worked to a T.

“This one falls on me, squarely,” LaFleur said. “Certainly, for us to be 2-for-12 on third down, obviously didn’t have a good enough plan for some of the zero pressures that they brought on us.

“But I thought our guys battled. I thought Jordan, I was really proud of the way he played. He hung in there, he was taking hits and delivering the ball. I thought he did a really good job. But I think that, Ultimately, I’ve got to be better and this one falls squarely on me.”

The Packers were in danger of being shut out for the first time in LaFleur’s tenure until Love finally put together a scoring drive, hitting Allen Lazard for a 20-yard touchdown with 4:54 remaining. He never got the ball back after that.

His final numbers were: 19-of-34 passing for 190 yards with a touchdown and an interception. He was only sacked once but the Chiefs had him running to avoid several more. Chiefs defensive coordinator Steve Spagnuolo sent five or more pass-rushers on 51% of Love’s dropbacks, the highest rate faced by a Packers quarterback since Week 15 of the 2017 season — the first game after Rodgers returned from his broken collarbone — according to research by ESPN Stats & Information.

Love completed just 6 of 17 passes for 30 yards against the blitz, and 20 of those came on the touchdown. He was blitzed on 69% of his third- and fourth-down dropbacks. More than once, the Chiefs sent seven defenders after Love, known as a “zero blitz.”

“I think we started having a better answer in the end, but yeah, they were bringing the all out, they were eating us up and we just weren’t able to execute on those plays that we had against it,” Love said. “I think all it took was maybe one big play against it, and it wouldn’t have been coming as much. Obviously, we weren’t able to execute it, so that’s why they kept bringing it.”

Love tried but never was able to get into a rhythm with Davante Adams, who was targeted 14 times but had just six catches for 42 yards. Love’s interception came on a sideline route by Adams in the fourth quarter.

“He took control of the huddle even when we were down 13-0, he’s still in the huddle, ‘Hey, we need a play, come on guys, let’s lock in,'” Jones continued. “All the right things you want to hear from your quarterback and you can tell in that game he never once got down on himself and just continued to play.”

Love said he battled some early nerves, missing on his first two throws on the opening series [a three-and-out], but that he believes he showed he’s a starting-caliber quarterback. He might not get another start this season, meaning it could be the Packers’ only chance to evaluate him in a game setting before deciding if he could replace Rodgers after this season.

Love did not play at all as a rookie after the Packers traded up to take him in the first round of the 2020 draft. He played in mop-up duty in the season-opening loss to the Saints and then watched Rodgers rattle off seven straight wins before his COVID test.

LaFleur said Rodgers will start next week against the Seahawks as long as he clears the protocols in time. The earliest he can return to the Packers is Saturday, the day before the game, and LaFleur said that’s early enough.

Love said he heard from Rodgers before the game and his message was: “‘Just go out there and ball out.’ He was excited to watch me. Said just trust my feet, which I think was really good advice coming from him.”