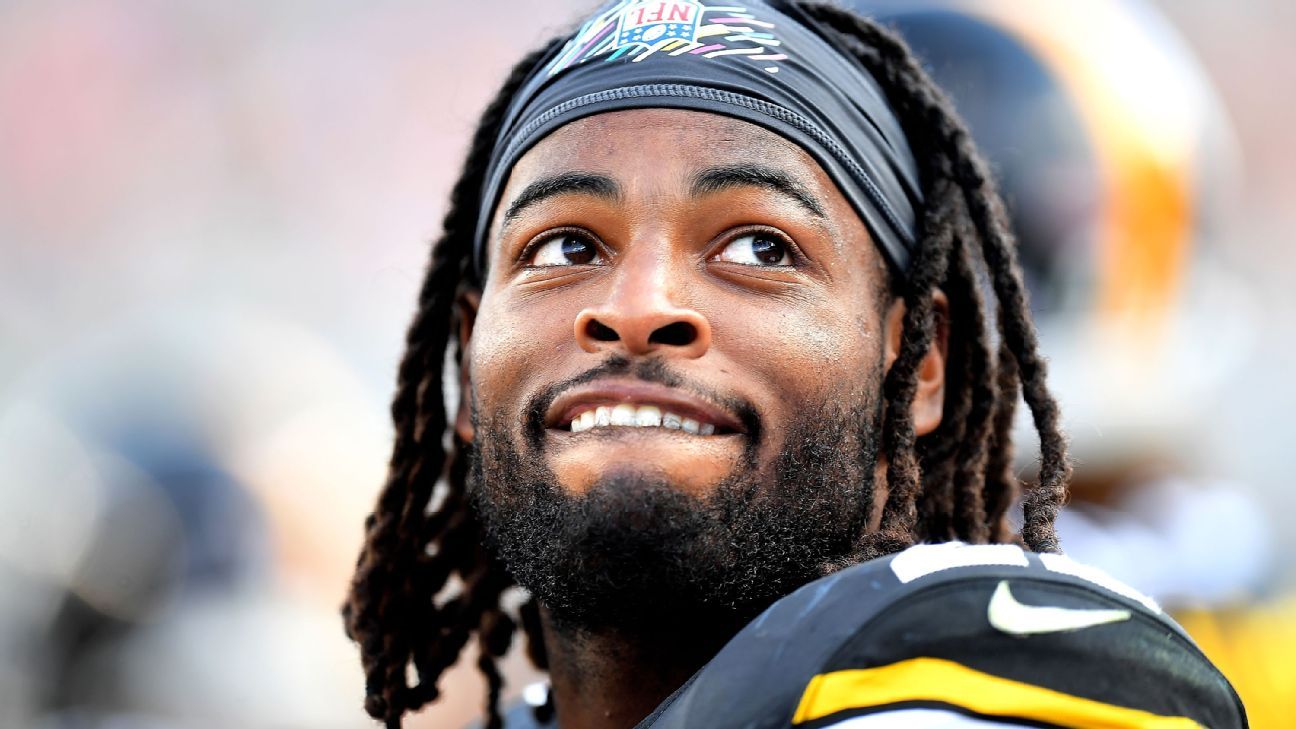 The first thing Najee Harris wanted to replace was the carpet.

It was once blue-green. But the short-looped industrial weave that covered the floors at the Greater Richmond (California) Interfaith Program (GRIP) had faded into a stained amalgamation from shoe prints of more than 20 years, traces of countless families looking for a fresh start.

The shoes of Harris, his mom and his four older siblings walked over that carpet when they arrived at the Richmond shelter more than a decade ago. This was the last of several shelters the Pittsburgh Steelers rookie running back and his family stayed in during his childhood, a time when they faced multiple evictions and a stint living in a van at Golden Gate Park.

When he went back to the shelter for a visit between helping Alabama win the national championship in January and becoming the No. 24 overall pick of the NFL draft in April, Harris noticed the carpet. He made a mental note to change it when he got the chance.

A few months later, thanks to a partnership between his foundation and Lowe’s, Harris helped GRIP replace the carpet with a dark hardwood tile throughout the 12,000 square foot, two-story building.

And he didn’t stop there.

While Harris, 23, watched through a video call from the Steelers facility last month, nearly 100 volunteers, including his family, descended on GRIP to start fulfilling the wish list Harris and his mother, Tianna Hicks, compiled from their experience living in the shelter and through meetings with the organization over the summer.

The additions included new appliances, a computer, a grill, a rock wall, playground, landscaping, pavers in the parking lot and a fresh coat of light blue-gray paint that looks almost iridescent when the light catches it.

“We have people that donate money, but having Najee is different,” said Siu Laulea, who was the case manager for Harris’ family during their stay at GRIP. “He wanted to upgrade the place. … [The residents] feel like it’s more like a home. It’s not like a facility, because of the color of the floor we have. And with a different color paint, it’s just a warm feeling. The vibe we do get from the residents, it’s a different vibe.

‘You’ve got to look at the bigger picture’

Harris was furious with Marcus Malu.

A trusted friend, Malu was also Harris’ trainer, and he ran a gym in the Antioch community where Harris went to high school.

One day around his sophomore year, Harris overheard two classmates talking about him and how he lived in shelters growing up.

He confronted them and asked how they knew. Then, he went to Malu.

Malu told him he shared part of Harris’ story at a strength and conditioning banquet the day before. He thought Harris’ story could help inspire the students.

“‘Man, I’m not happy with that,'” Malu remembers Harris telling him. “I said, ‘Listen, cut me off if you need to, or be mad if you have to. But sooner or later, you’re going to have to tell your story. It’s part of who you are.'”

Harris didn’t speak to Malu the next two weeks. Then, he walked back into Malu’s gym and sat down wordlessly. He didn’t have to say anything for Malu to know Harris had forgiven him.

Harris is starting to understand how to impact change, naming his newly formed non-profit organization Da’ Bigger Picture Foundation after realizing little things can add up to make a difference.

“If all of us help each other out somehow, then we all can just try to make a change into something,” Harris said. “It took me all these years to really figure that out, so I wanted to help somebody else, because people think that success or whatever you want, prosperity, anything, just happens like that.

“It’s not really that simple. You’ve got to look at the bigger picture.”

It’s a message Hicks started instilling in Harris and his siblings during their formative years spent in temporary housing.

“I may have been there in line myself, but I might’ve got on the other side of the table and helped pass out food as well,” Hicks said. “I’ve done a few things throughout their lives, just to show them that giving back is as important as receiving.”

On one of the biggest days of his life, Harris was worried about dessert.

Not for him, but for the group of kids he was preparing to feed at a pre-draft party at GRIP before the first round began on April 29.

The night before, Harris was restless; he couldn’t sleep. He grew concerned there wouldn’t be enough food.

The next morning, he realized he might be short on dessert.

“He wanted to make sure that those kids had everything: dessert, food,” Hicks said. “He was worried about dessert. He was calling around asking for someone to go find dessert so they can have sweets afterwards.”

Harris’ story of homelessness has been told at every single stop of his career. And when the local news channels caught wind of the pre-draft party at GRIP, the cycle started over again.

But with every round of renewed interest comes another opportunity to inspire or provide for one more person.

Donations poured into GRIP after Harris highlighted the organization during the draft party, helping them to not only continue providing shelter to families in the area, but also serve hot meals to the community and offer programs that assist with obtaining legal documents or referrals for drug and alcohol treatment.

“Before this all started, we were in the negative as a non-profit,” said Nicole Jones, GRIP’s executive assistant. “People saw on the news and started coming in. Here’s a check here, here’s a check here. … With those monies, we’re able to keep afloat. Keep payroll going with the staff, keep the doors open and keep the programs going.”

While Harris helped with a lot of the behind-the-scenes planning for the draft day party, Hicks has been instrumental in continuing the work and mission of the Da’ Bigger Picture Foundation.

“It’s very rewarding, and it’ll make you feel very empowered to know that I can do something to change things,” Hicks said. “It makes a big difference now, because you don’t speak when you’re homeless. You’re too focused on trying to make sure you have a place to stay that night for your family. Trying to make sure you can feed them that evening. How am I going to get to school, to work, tomorrow?

“So, being able now to come back and say, ‘These are some things that I know these families are going to need,’ it changes things. That’s why I want to tackle this so much more, because I see differently now.”

In the midst of his rookie season, Harris — whose Steelers host the Chicago Bears on Monday night (8:15 pm, ESPN) — hasn’t decided what project he wants to tackle next, or when.

“He’s such a philanthropist, and you can just see those motors running in his head,” Jones said. “He wants to do this, he wants to do that. I’m like, ‘wait, slow down. Anything that you want to do, we’re going to let you do. But slow down, we’ve got to do one at a time.'”

Once, Harris even asked if he could purchase the GRIP building to help out. Jones laughed and told him they already owned the building. So he came back with another idea.

“‘Well what if I wanted to buy a building and open up another shelter?,'” Jones remembers Harris asking her. “I said, ‘You can do that, too.'”