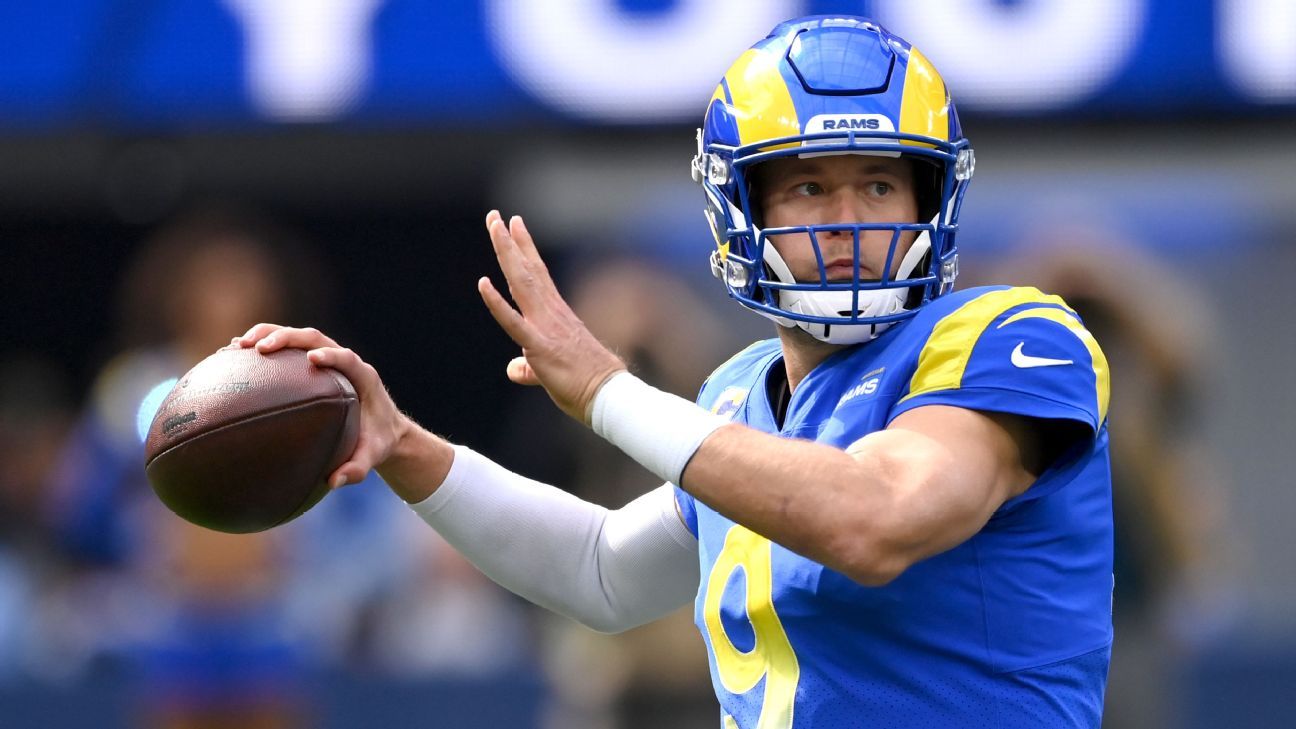 Despite quarterback Matthew Stafford spending most of the practice week in the training room, Los Angeles Rams coach Sean McVay told reporters Friday that he anticipated Stafford would play against the Tennessee Titans in a prime-time matchup on Sunday.

Because of a back issue, Stafford was held out of practice most of the week, but McVay said he would participate in a limited capacity Friday.

“He doesn’t seem to be concerned about it, but I think we want to err on the side of caution,” McVay said before practice. “When you’re a veteran player like him, you kind of let them dictate the terms, and really he’s always going to be a guy who is going to push it so we’ve been more cautious with him, held him out. He’s going to do a couple things today, but based on the feedback and the way that he’s feeling, I think he’s trending in the right direction.”

“I feel good,” Stafford said about his back earlier this week. “I’ll be fine and play Sunday. I am not worried about it, just stiff.”

Stafford is one of many Rams players who has been nursing an injury or illness ahead of Sunday’s game.

Receiver Robert Woods has also been sidelined and slowed throughout the week because of a foot injury, but McVay indicated Woods would be available.

“I expect them to play,” McVay said about Stafford and Woods.

Cornerback Jalen Ramsey is dealing with a knee issue and linebacker Ernest Jones a stomach illness, but both are on track to play. Cornerback Darious Williams, who has been recovering from an ankle injury, is anticipated to be activated from injured reserve, McVay said.

It’s uncertain whether Von Miller will be able to make his debut after the Rams completed a blockbuster trade ahead of the deadline earlier this week to acquire the All-Pro outside linebacker.

Miller sprained his left ankle in Week 7, was inactive Week 8 and the Rams are being cautious with his continued recovery and will make him a game-time decision.

“He’s making good progress. It’s hard because we really haven’t had a lot of exposure to Von, and he’s so tough, he’s such a great competitor, he’s always really pushing it,” McVay said. “If you ask Von, I think he would say, ‘Hey I’m feeling better, making good progress,’ and that’s all you can really ask.”

Defensive lineman Sebastian Joseph-Day will undergo surgery after he reaggravated his injured pectoral muscle and will be sidelined indefinitely, McVay said, adding that he was unable to provide any timeline for Joseph-Day’s return. Joseph-Day has started seven games and has three sacks this season.