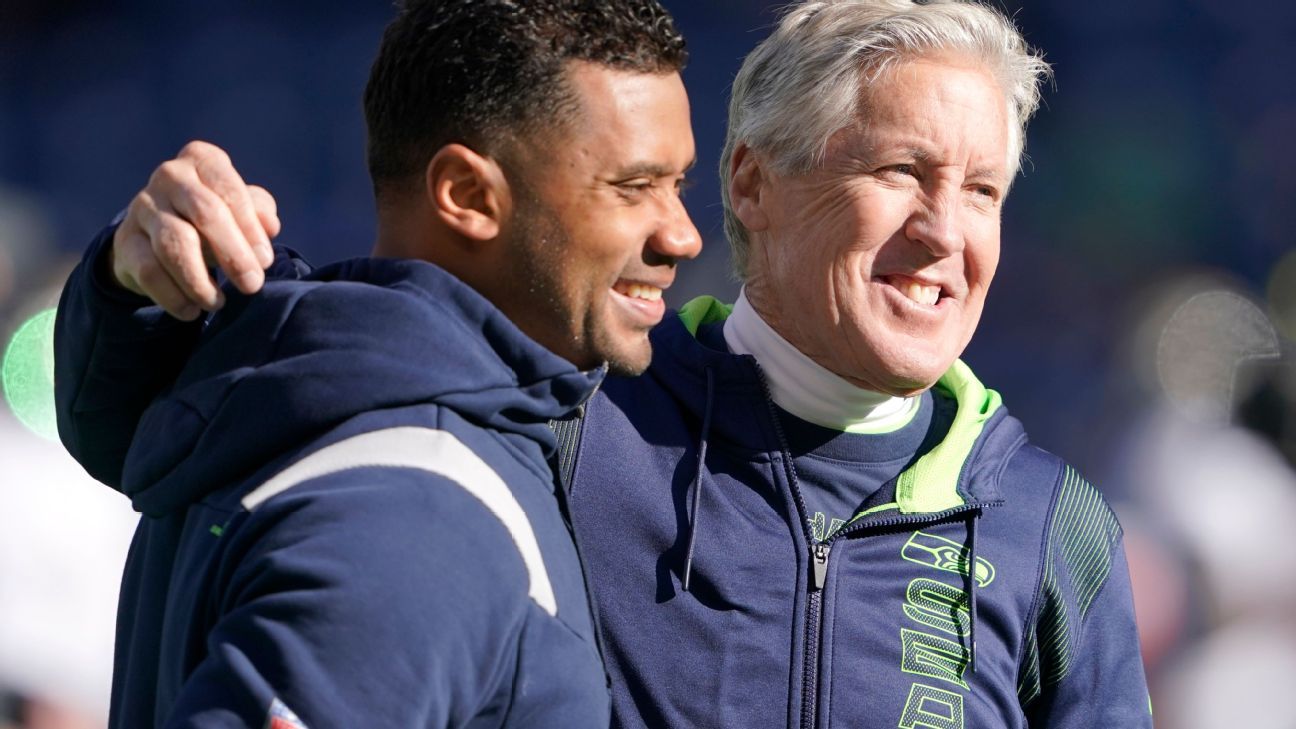 RENTON, Wash. — Seattle Seahawks coach Pete Carroll said quarterback Russell Wilson is not being limited in practice this week in his return from an injury to his right middle finger.

Wilson practiced on Monday for the first time since his Oct. 8 surgery.

“I’ve just seen him in the walk-through since then and you would never have known,” Carroll said before Wednesday’s practice. “So I don’t know what that means yet, but he looks pretty good.”

Carroll said earlier in the week that the plan was for Wilson to play Sunday against the Green Bay Packers assuming all goes well this week. The Seahawks would need to activate Wilson off injured reserve by Saturday to make him eligible.

Because he is not on the active roster, the Seahawks aren’t required to include Wilson’s level of participation on their daily practice reports. But Carroll answered in the affirmative when asked whether Wilson is a full participant.

Wilson was not seen wearing a glove during the portion of Monday’s practice that was open to reporters.

“He doesn’t have to wear anything unless he chooses to,” Carroll said. “He has been experimenting with some stuff just to see what’s out there for him.”

The Seahawks on Wednesday designated running back Chris Carson for a return to practice. Carson has missed the past four games with a neck injury and was placed on IR the same day as Wilson, making both players eligible to return for the Green Bay game.

“He’s got to make it through the week of work and like we always talk about, it’s a one-day-at-a-time thing,” Carroll said. “He’ll get banged around a little bit tomorrow, but just see how he responds to it. It’s pretty important to get a good bead on this one. He’ll feel good physically running around and all that because he’s in great shape and he’s been working really hard, so it’s just how he responds — same old thing — and how his body reacts to the workload.”

Carroll said Carson has gotten through the discomfort he was dealing with in his neck.

“That’s why he’s back and hopefully it’ll stay that way,” the coach said. He said he didn’t know whether Carson would have to be on a so-called pitch count whenever he returns.

The Seahawks designated rookie receiver Dee Eskridge for a return to practice on Monday. Seattle’s second-round pick hasn’t played since suffering a concussion in the opener. He made two trips to a concussion specialist in Florida to work through issues he was having with his vision.