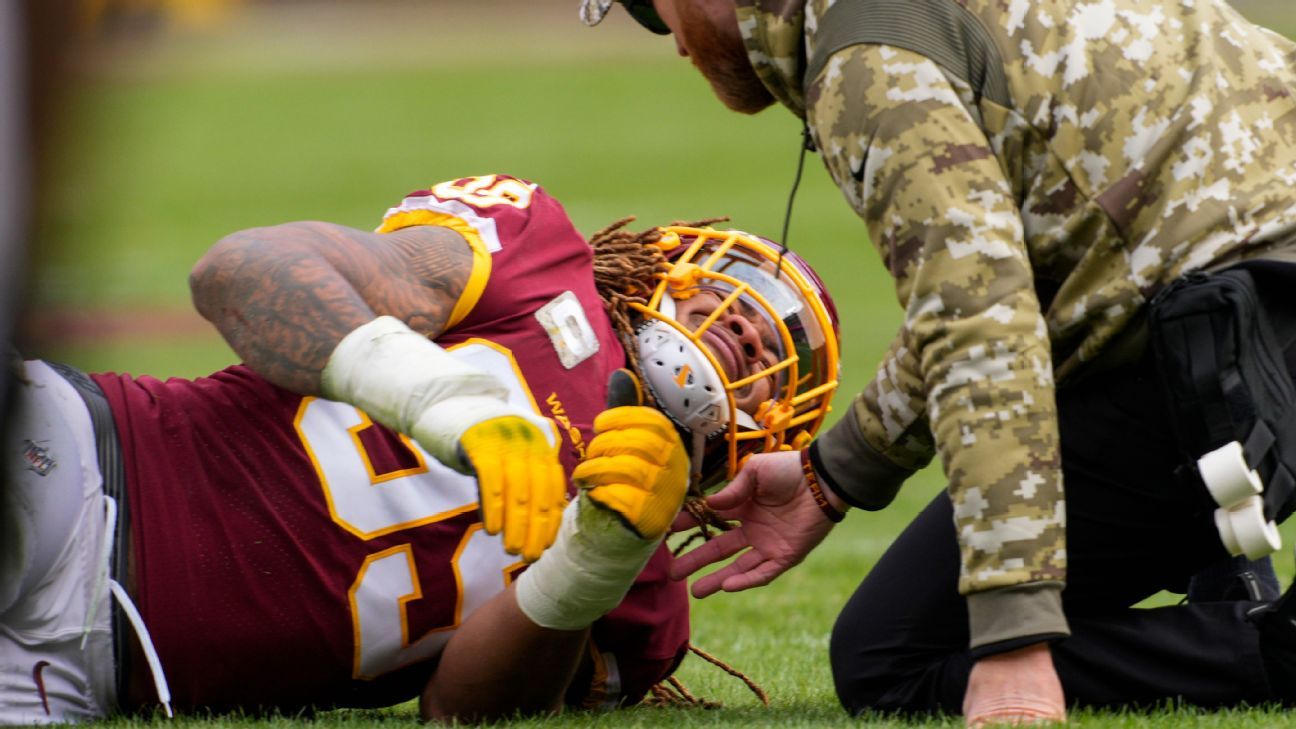 Rivera said it was “potentially an ACL” but that Young will undergo further tests Monday.

“Hopefully it’s not as bad as we think right now,” Washington receiver Terry McLaurin said. “It’s hard to see a guy like that go down for us. He’s a dominant player for us. He’s a leader for us.”

Young suffered the injury with 7 minutes, 49 seconds left in the second quarter when he hastened quarterback Tom Brady on a third-and-2. Young went to the ground without much contact and wrote in pain.

When the cart came onto the field, Young waved it off and opted to limp more than 30 yards to the tunnel, with the help of teammate Brandon Scherff for part of the walk and then with athletic trainers.

“It’s definitely sad,” Washington defensive tackle Jon Allen said. “It’s going to be tough, but knowing Chase’s personality, knowing the way he works and the kind of guy he is, he’ll come back stronger than ever.”

Young addressed the defensive players at halftime, trying to keep them focused and imploring them to finish strong. Teammates said it was in his same matter-of-fact tone that he uses during other times he talks to the team.

He spent the second half on Washington’s sideline, hobbling around on crutches or sitting on the bench.

“Just seeing him back out there, walking off on his own power, was big for us,” Washington safety Bobby McCain said. “That gave us a sense of hope. He’s a leader and a team captain; having him there was big for us, talking to our young guys, old guys. Not being on the field, at least he can lead in some way.”

Washington was already down one starting defensive end, as Montez Sweat suffered a broken jaw on Oct. 31 at Denver. He will miss four to six weeks. If Young is out, Casey Toohill and James Smith-Williams would start at the end positions with rookie Shaka Toney as a primary backup. Smith-Williams and Toohill are both in their second season. All three are seventh-round picks replacing first-rounders.

“I’m sure fans were nervous, but I felt comfortable because I’ve seen what they do in practice and what they did in limited opportunities,” Allen said. “Chase Young is Chase Young, but I have no doubt they’ll step up and play good football.”

Young has not had the season he or Washington had hoped. He has just 1.5 sacks — one year after being named NFL Defensive Rookie of the Year after 7.5 sacks.

Rivera has harped on Young needing to be more disciplined as a pass-rusher, both with his technique and with his approach.

Last week, Young, the No. 2 pick in the 2020 draft, said he was not bothered by criticism of his play from the outside.

“I’m a man, I can take the criticism,” Young said. “It’s a process. Everybody will talk. Just wait until down the road. Just keep watching.”