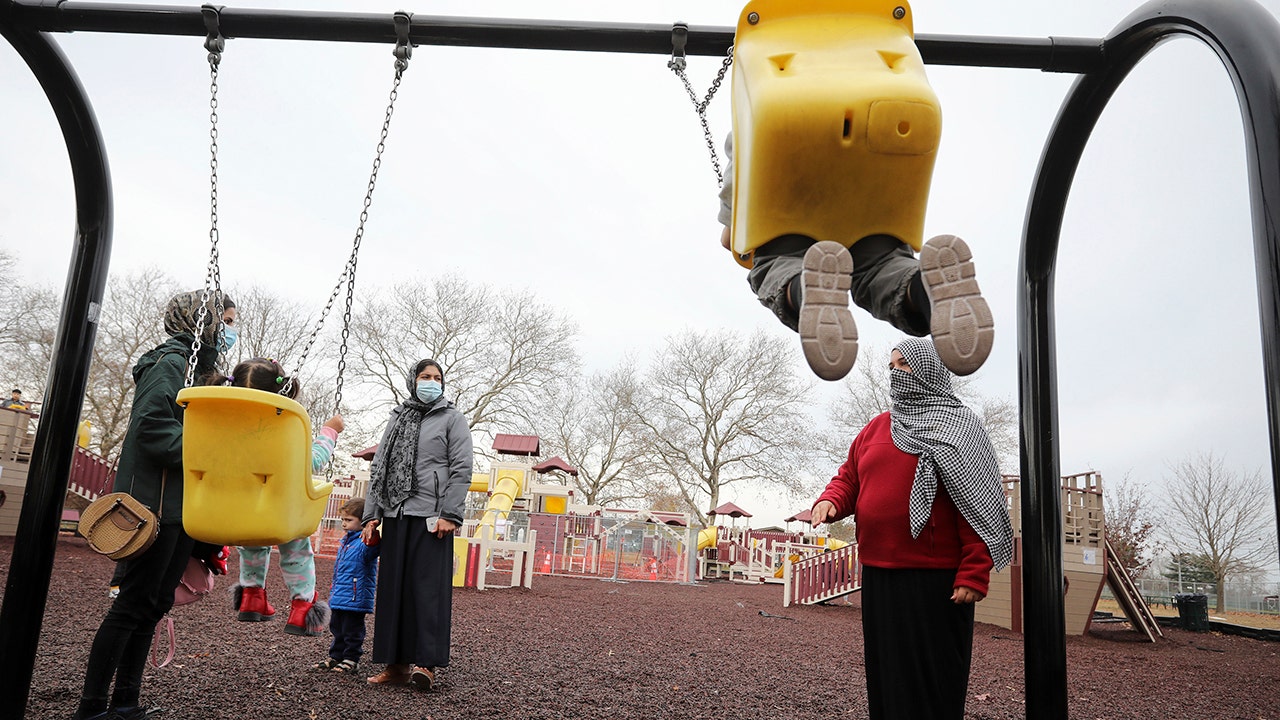 The former interpreter for the U.S. Army counts himself among the lucky as an Afghan who managed to make it through frantic crowds outside the Kabul airport to board a military evacuation flight out of the country with little more than the clothes on his back.

Esrar Ahmad Saber now waits, along with 11,000 other Afghans, from the safety of a U.S. base in central New Jersey, while worrying about family members left behind and enduring a prolonged resettlement process.

Saber has been at Joint Base McGuire-Dix-Lakehurst in central New Jersey since Aug. 26 as has nearly everyone else at one of the three “villages” set up there for refugees. “They want to go to their new homes and start their new lives,” the 29-year-old said. “They are really excited about it. But the fact is, the process is very slow.”

THOUSANDS OF AFGHANS A DAY CROSS BORDERS, ‘EVEN IF IT MEANS OUR DEATH’

Afghan refugee women register to be seen by a doctor inside the medical tent at Liberty Village on Joint Base McGuire-Dix- Lakehurst, New Jersey, on Dec, 2, 2021.
(Barbara Davidson/Pool via AP)

The slow pace has become a defining characteristic of Operation Allies Welcome, the largest U.S. refugee resettlement effort in decades. Even as Afghans still arrive, thousands remain in limbo, anxious about their future as they fearfully follow the news of Taliban reprisals and economic collapse back in their homeland.

Operation Allies Welcome reached a milestone this week as the number resettled in American communities — 37,000 — surpassed the 35,000 at six bases around the country. But people involved with the effort readily concede it’s been a challenge for a number of reasons, including a scarcity of affordable housing, cutbacks to refugee programs under Trump as well as the sheer number of refugees.

“It’s been a shock to the system because we just haven’t had this many people arrive at the same time in a really, really long period,” said Erol Kekic, a senior vice president with Church World Service, one of nine national resettlement agencies working with the government in what is formally known as Operation Allies Welcome.

The resettlement organizations and the Department of Homeland Security, the lead federal agency in the effort, are working toward a goal of having everyone off the bases by Feb. 15. The New Jersey installation now hosts the largest number, down from a high of 14,500, followed by Fort McCoy in Wisconsin with 7,500.

There are 3,200 more at overseas transit points awaiting flights to the U.S. as well as some still making it out of Afghanistan.

“I feel pretty good about our chances of moving everybody off the base before that day,” Kekic said. “Whether or not we get there by Feb. 15, I think remains to be seen.”

The government last week conducted a guided tour for journalists of the New Jersey installation, where refugees stay in brick buildings previously used as barracks or in sprawling tent-like prefabricated structures.

There are fields for soccer, courts for basketball and cavernous warehouses where refugees receive clothes and other supplies. There are also classrooms for the children, who make up about 40% of the population, as well as language lessons and job training for adults and a medical clinic.

Afghans staying at the base go through immigration processing as well as health screening and vaccinations, including for COVID-19. More than 100 babies have been born to women at the base.

Saber, who came from Afghanistan by himself and left a brother and sister behind, says the refugees are happy, just eager to move on. “It’s a dream to be here. They just want to get out as soon as possible.”

Among the refugees are new arrivals as well. Ghulam Eshan Sharifi, a microbiologist, came on Nov. 14 with his wife and two children after 23 days in Qatar. He was relieved but worried about his adult daughters back in Kabul who held government jobs before the Taliban returned.

An Afghan refugee child reaches for a piece of bread during lunch hour at an eating facility in Liberty Village on Joint Base McGuire-Dix- Lakehurst in Trenton, New Jersey, Thursday, Dec. 2, 2021.
(Barbara Davidson/Pool via AP)

“They have no jobs now. They cannot even go outside so we are obviously afraid about what will happen to them,” Sharifi said. “We are hoping that God will solve the problem.”

He said he hopes to settle in the Denver area but does not yet know when, or if, that will happen. “This is just the beginning for us,” he added.

Many refugees are also recovering from what was for many a traumatic escape from a country that collapsed much more quickly than the U.S. government, at least publicly, anticipated.

“Most, if not all of them have worked with our forces and they have been part of the U.S. effort in some way,” said Air Force Col. Soleiman Rahel, who came to the U.S. with his family as a refugee from Afghanistan when he was a teenager and is on a temporary assignment working with the refugees at the base. “So, it’s very traumatic. It’s very hard for them.”

Rahel said he can appreciate the challenges the new arrivals will face since his own parents confronted similar ones, including being forced to take lower-level jobs than they were accustomed to back in Afghanistan so they could support their family and the kids could go to school.

He also can understand why so many of the refugees want to move to areas where there are established Afghan communities — particularly Northern California, the Washington, D.C., area and Houston — even though those requests are straining resettlement efforts there and contributing to the delays.

Given the extent of the challenge, the agencies have enlisted help beyond groups that typically work with refugees, including veterans groups and even local sports clubs to sponsor families to help them get situated. Resettlement officials say it might have been easier if the entire process had been shifted to a U.S. territory such as Guam, which has been used for that purpose in the past, or if there had been more time to prepare in advance for their arrival.

“This thing should have been planned before they announced the withdrawal. Right? So in that sense, it is taking longer than it should,” Mark Hetfield, president of HIAS, another of the nine resettlement organizations, said. “But considering they decided to plan for this after they made the decision to withdraw, given that the depletion of the capacity of the U.S. refugee program over the last four years, none of this is surprising.”

Service members look on as an Afghan refugee walks inside a temporary housing facility in Liberty Village on Joint Base McGuire-Dix- Lakehurst in Trenton, New Jersey, Thursday, Dec. 2, 2021.
(Barbara Davidson/Pool via AP)

While refugees receive temporary assistance after being resettled, most are expected to achieve self-sufficiency. That proves to be difficult when many don’t speak English well, have academic credentials that won’t be recognized in the U.S. and lack the job and credit history needed.

Saber said he hopes his experience as a military interpreter will allow him to join the Army. He recently learned that he would be getting resettled in Phoenix, but has no idea when he’ll leave. “I’m just waiting for a flight.”