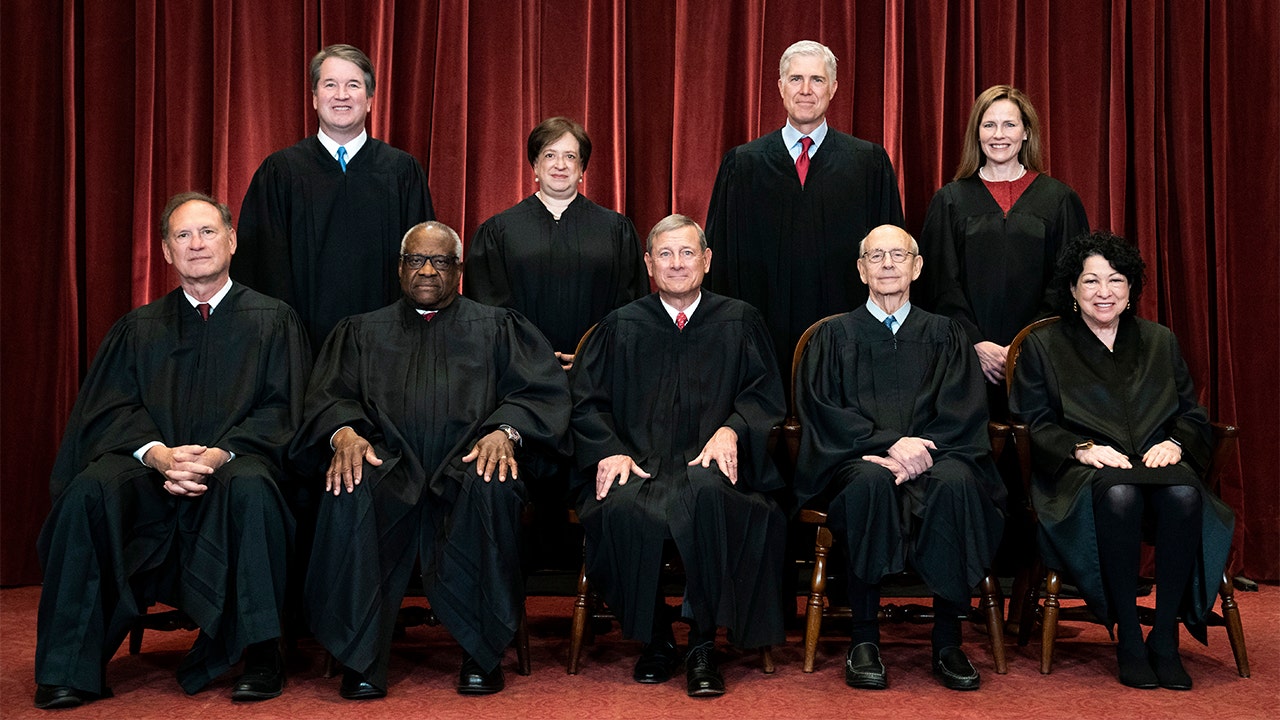 Biden Supreme Court commission votes to send president report taking ‘no position’ on court-packing
The Presidential Commission on the Supreme Court voted unanimously Tuesday in favor of approving its final report and sending it to President Biden‘s desk.

The vote concluded the work of the 34-member commission, which held six public meetings and called on 44 witnesses. Biden, who has expressed opposition to expanding the court, formed the commission in April to study court expansion and reform amid calls from some within the Democratic Party to add more justices.

The final draft of the 288-page report, which drew vocal opposition regarding some of its conclusions, was released Monday and stopped short of offering specific recommendations. Instead, it offered a summary of arguments for and against issues ranging from court-packing and judicial term limits to various elements of court practice.

During Tuesday’s virtual hearing, several members noted the sharp differences of opinion among those on the commission regarding such issues, which the report summary said mirrors “the broader public debate.”

Regarding court-packing, the report said: “No serious person, in either major political party, suggests court packing as a means of overturning disliked Supreme Court decisions, whether the decision in question is Roe v. Wade or Citizens United. Scholars could say, until very recently, that even as compared to other court reform efforts, ‘court-packing’ is especially out of bounds. This is part of the convention of judicial independence.”

“The commission takes no position on the validity or strength of these claims,” the report’s summary added. “Mirroring the broader public debate, there is profound disagreement among commissioners on these issues. We present the arguments in order to fulfill our charge to provide a complete account of the contemporary court reform debate.” CLICK HERE FOR MORE ON OUR TOP STORY.

Jussie Smollett blasts prosecutor for reading actor’s texts that included N-word
Jussie Smollett took the stand for the second day in a row at his trial on Tuesday.

The former “Empire” actor denied under oath all allegations that he brought the Osundairo brothers on a “dry run” of his attack two days prior to it taking place. The two siblings previously testified that he paid them to help him orchestrate the attack in downtown Chicago in January 2019.

Smollett sat in the witness stand where he faced tense, continued cross-examination from Special Prosecutor Dan Webb, who began questioning him as a witness the previous day. In the first part of the day, Webb forced Smollett to deny that he picked up Abimbola and Olabingo Osundairo in his car and drove them around the area where he wanted the attack to take place.

Webb also showed private Instagram messages between Abimbola Osundairo and Smollett in which the latter kept updating Abimbola on his whereabouts and flight delay information on the night of the attack, making the case that he was working with him to time out the planned attack.

The duo had a contentious moment when Webb began reading the messages out loud. Some messages included the use of the N-word, prompting Smollett to interrupt the prosecutor to ask him to spell or abbreviate the word so as not to offend “every African American in this room.”

Webb said that Smollett was welcome to read his own messages to the court but that he would not censor the quotations of the actor’s messages. Smollett complied, and the two moved on. CLICK HERE FOR MORE.

“Custom House does not intend to publish the Chris Cuomo book,” a HarperCollins spokesperson confirmed to Fox News on Tuesday.

Cuomo’s book, titled “Deep Denial,” was described by the publisher as “a provocative analysis of the harsh truths that the pandemic and Trump years have exposed about America – about our strength and our character – and a roadmap of the work needed to make our ideals match reality.”

The disgraced anchor previously announced Monday that he was ending his SiriusXM radio show.

CNN announced Saturday it had terminated Cuomo, who had already been placed on an indefinite suspension for his involvement in his brother’s scandals, after CNN learned of “additional information” that expedited Cuomo’s firing.

“Reliable Sources” host Brian Stelter confirmed Sunday that the “additional information” CNN had referenced was a sexual misconduct allegation that was brought to the network’s attention by the accuser’s attorney, Debra Katz. CLICK HERE FOR MORE.

TODAY’S MUST-READS:
– Air Force wants to retire the A-10, an ‘anchor’ holding it back; House acts in new spending bill
– Dana Perino: Thanks to Biden, Putin now ‘holds all the cards and all the leverage’
– Man on death row makes stunning admission just before his execution
– Model comes clean about what it was really like living in the Playboy Mansion
– Glenn Foster, former NFL player, dead at 31; was in Alabama police custody: reports
– Rittenhouse dunks on NBA star for mocking his emotional testimony
– Navy SEAL dead after Virginia training accident: reports

A San Francisco police lieutenant on Tuesday evening blamed the American Civil Liberties Union (ACLU) for “undermining public safety” with its handling of California’s string of smash-and-grab robberies that have plagued local retailers ahead of the holiday season.

“They now seem to be taking the side of the people who commit the crime instead of the victims who continue being victimized,” Lt. Tracy McCray said on “Fox News Primetime.” “If someone attacks someone, they shouldn’t be out to do it again and again and again but, of course, that’s what you are seeing.”

This edition of Fox News First was compiled by Fox News’ David Aaro. Thank you for making us your first choice in the morning! We’ll see you in your inbox first thing Thursday.