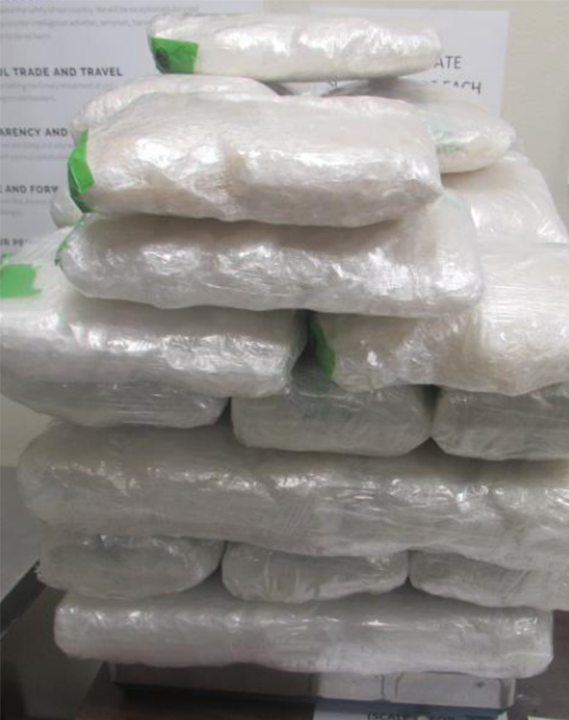 U.S. Customs and Border Protection officers in Texas seized more than $3 million worth of methamphetamine in two separate incidents over the weekend, according to the agency.

Both seizures took place in proximity to the Hidalgo International Bridge which crosses the Rio Grande at northwestern Mexico and southern Texas, CBP said.

CBP officers assigned to the Hidalgo International Bridge encountered a white Chrysler minivan being driven by a 20-year-old American woman arriving from Mexico on Friday.

An officer referred the vehicle for further inspection, which involved the use of non-intrusive imaging (NII) equipment. A physical inspection of the vehicle yielded 21 packages of alleged methamphetamine weighing around 190 lbs. hidden inside.

Packages of meth discovered in a vehicle at the U.S.-Mexico border.
(CBP)

An officer referred the vehicle for further inspection, which also involved the use of non-intrusive imaging (NII) equipment and screening by a canine team. During a physical inspection, officers discovered about 30 lbs. worth of methamphetamine hidden inside the vehicle.

CBP’s Office of Field Operations (OFO) seized the narcotics and vehicles and arrested the drivers. Altogether the drugs seized Friday and those seized Sunday were worth about $3,061,000. The case is being investigated by the U.S. Immigration and Customs Enforcement-Homeland Security Investigations (ICE-HSI).

People walk out of the Hidalgo international border crossing bridge after shopping in Black Friday in McAllen, Texas, U.S., ahead of the holiday season, in Reynosa, Mexico November 26, 2021.
(REUTERS/Daniel Becerril)

A CBP spokesman told Fox News that officers determine whether to refer a vehicle for further inspection based on what they observe, including the behavior of the driver and any discrepancies in either the vehicle or what is or isn’t said by the driver.

According to the latest CBP statistics, drug seizures nationwide rose by 4% in October – the most recent data. Of those, methamphetamine seizures increased by more than 40%.