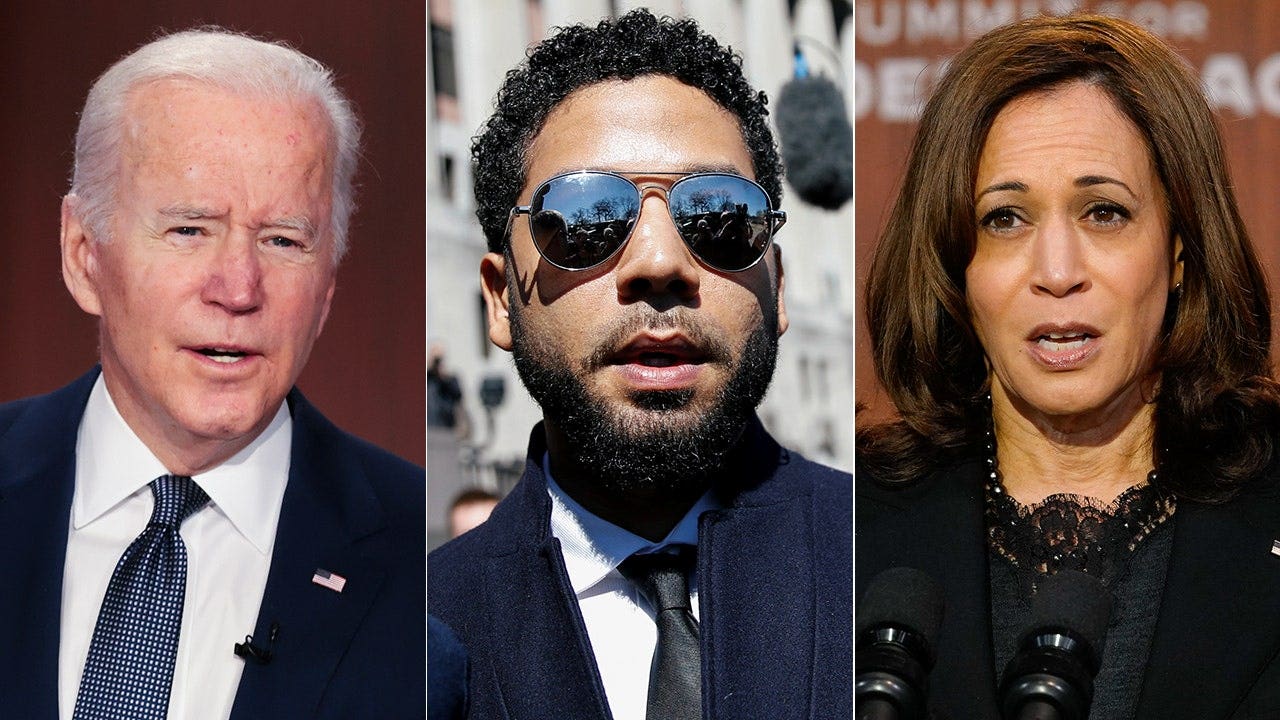 Jussie Smollett guilty verdict casts new light on past support from Biden, Harris, other Dems
Former “Empire” actor Jussie Smollett was found guilty Thursday on five charges of staging a hate crime and lying to police, raising questions about whether several high-profile political figures would offer apologies or attempt to clarify their past public support of Smollett.

“What happened today to @JussieSmollett must never be tolerated in this country,” Joe Biden tweeted in January 2019 when he was mulling a presidential run. “We must stand up and demand that we no longer give this hate safe harbor; that homophobia and racism have no place on our streets or in our hearts. We are with you, Jussie.”

Then-U.S. Sen. Kamala Harris also believed Smollett’s story and posted about it on Twitter in 2019, calling the alleged attack against Smollett an attempted “modern day lynching.”

U.S. Sen. Cory Booker, a New Jersey Democrat who ran for president, also referred to the alleged attack as an attempted “modern-day lynching.”

Democrats such as U.S. Rep. Alexandria Ocasio-Cortez, Chicago Mayor Lori Lightfoot and many others, plus independent U.S. Sen. Bernie Sanders, also chimed in with support for Smollett. CLICK HERE FOR MORE ON OUR TOP STORY.

Rachael Rollins, newly confirmed Biden pick for US attorney, seen berating reporters in past video
A past video of Biden federal prosecutor pick Rachael Rollins rebuking reporters for attempting to interview her near her home resurfaced Wednesday after the Senate confirmed her to be a U.S. attorney for Massachusetts.

In the video from January 2021, Rollins accuses journalists of placing the lives of her children at risk by requesting the interview near her home. Rollins becomes visibly upset, demanding to know how the reporters from Fox affiliate Boston 25 News knew where she lived. They respond that her address is a matter of public record.

“So as a Black woman, in this moment in this country, you’re going to put my f—ing house on screen?” Rollins asks a reporter. At no point in the video is Rollins’ house shown.

“No, no, no, ma’am. We’re just here approaching you to ask you a question,” the reporter replies, according to the video. CLICK HERE FOR MORE.

In other developments:
– Tucker Carlson: If you think race is a moral category, you should be nowhere near our justice system
– Biden’s US Attorney Rachael Rollins ‘most unhinged’ person possible for the job: Horace Cooper
– Confirmation of Rachael Rollins despite non-prosecution policies is ‘putting ideology before people’: Cotton
– With Rachael Rollins confirmation, Harris surpasses Pence in Senate tie-break votes
– Biden US attorney nominee has lengthy do-not-prosecute list

Penn trans swimmer’s teammate speaks out as Lia Thomas smashes more records
While University of Pennsylvania transgender swimmer Lia Thomas, who spent three years at the Ivy League school swimming as a male, has been busy smashing female pool records, friction has been building within the team, according to a Penn female swimmer who said she feared for her ability to find employment after graduating from college for sharing her honest opinion about a transgender teammate. For that reason, OutKick is granting her anonymity to speak out.

“Pretty much everyone individually has spoken to our coaches about not liking this. Our coach [Mike Schnur] just really likes winning. He’s like most coaches. I think secretly everyone just knows it’s the wrong thing to do,” the female Penn swimmer said during a phone interview.

“When the whole team is together, we have to be like, ‘Oh my gosh, go Lia, that’s great, you’re amazing.’ It’s very fake,” she added.

Members of the team were first alerted to the forthcoming change in 2019 when Thomas, who was second-team All-Ivy League as a male during the 2018-19 season, announced that he would be going through the transition that would allow him to compete as a woman under the NCAA’s transgender policy. CLICK HERE FOR MORE.

THE LATEST FROM FOX BUSINESS:
– Elon Musk says he’s ‘thinking of’ quitting his jobs
– Costco sees sales boost both in stores and online
– White House deflects on inflation as Americans suffer surging prices
– CEO of drilling company says Biden isn’t done worrying about gas prices yet
– Biden signs order for federal government to reach net-zero emissions by 2050
– How to spot a gift card scam this Christmas season
– NHL team squares up with city after near eviction

Tammy Bruce, a Fox News contributor, took aim at America’s political left on Thursday night, claiming liberals are “a cult in a never-ending fight with reality,” who are out to control “all aspects of members’ lives.”

“Now, keep in mind, a cult has some basic tenets and behaviors we see — not just with the so-called “progressives” but now being applied by the Biden administration itself,” Bruce said on “Fox News Primetime.” “Among other aspects – including groupthink as its foundational requirement – questions are not encouraged and even punished. Followers are to worship a group leader. The cult follows and controls all aspects of members’ lives.”

Today’s edition of Fox News First was compiled by Fox News’ Dom Calicchio. Thank you for making us your first choice in the morning! Have a great weekend and we’ll see you in your inbox first thing on Monday.