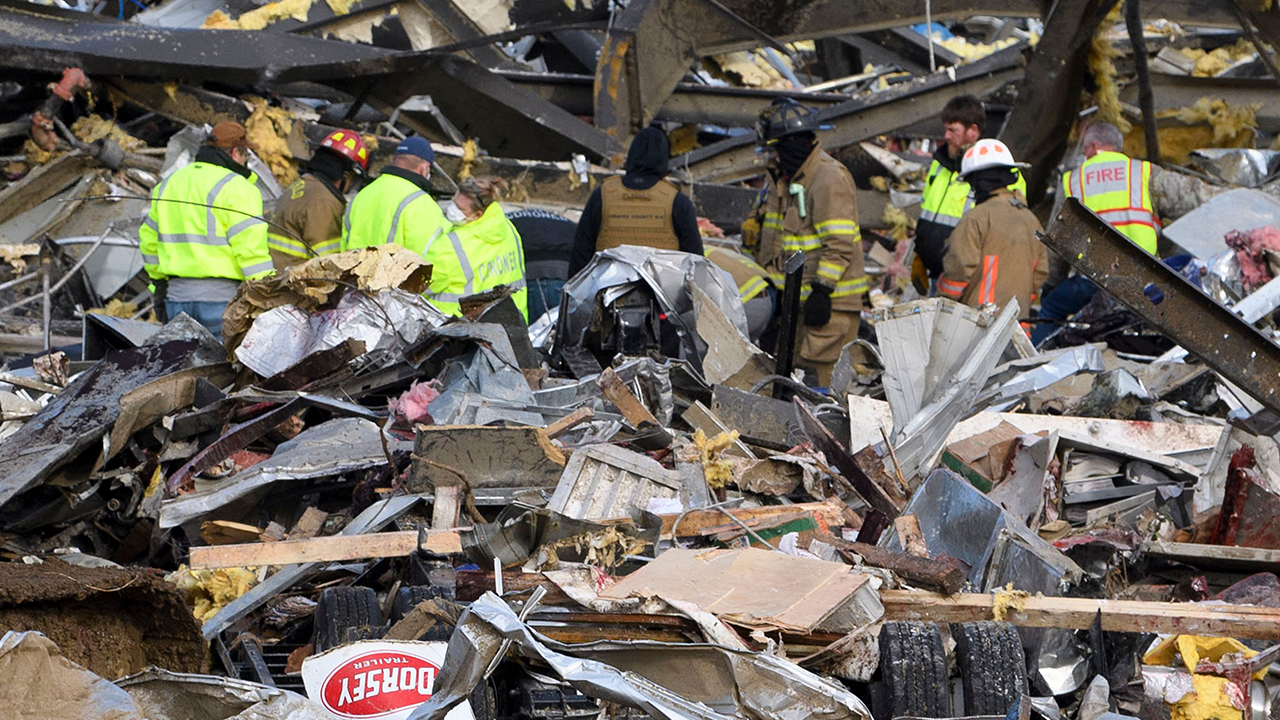 There was little that Kyanna Parsons-Perez could do inside a candle factory in Mayfield, Kentucky, on Friday night after a furious tornado made the building collapse.

So she started a live stream on Facebook as she and co-workers waited to be rescued.

“This is the only thing keeping me calm, so I’m going to keep going,” Parsons-Perez says in her video, according to The Wall Street Journal. “I hope you are all watching.”

As the video continues, Parsons-Perez is heard trying to reassure co-workers that help is coming.

Later, she tries to sum up what happened at the factory.

During the video Parsons-Perez reveals that Saturday was her 40th birthday and she hoped to celebrate. She later asks if someone can check on her children, about 30 miles away in Paducah, Kentucky.

Emergency workers search what is left of the Mayfield Consumer Products Candle Factory after it was destroyed by a tornado in Mayfield, Kentucky, on Dec. 11, 2021.
(Getty Images)

Parsons-Perez later told TV interviewers that emergency workers rescued her from about five feet of rubble, the Journal reported.

Some of the rescued people had crush injuries from walls, beams or cylinder blocks falling on them, while others had suffered chemical burns from substances used to make candles, The Washington Post reported.

Some surviving workers had bone fractures, others seemed to be in shock, and some appeared to have suffered concussions, the newspaper reported.

‘It’ll be a miracle’

Sadly, many other people who worked at the factory in Mayfield, a town of about 10,000 residents in southwest Kentucky, were not expected to be found alive.

Gov. Andy Beshear said many fatalities were expected at the site as emergency crews continued their work.

About 110 people were believed to be in the factory when the tornado struck, Beshear said, according to the Journal.

About 40 people were rescued during the night but Beshear said Saturday afternoon that no one else had been rescued since about 3 a.m. Saturday.

“It’ll be a miracle if anyone else is found alive in it,” Beshear told reporters, according to the Post.

Elsewhere, at least six people were reported dead at an Amazon warehouse that collapsed in Edwardsville, Illinois, and smaller numbers of fatalities were reported in Missouri, Tennessee and Arkansas.