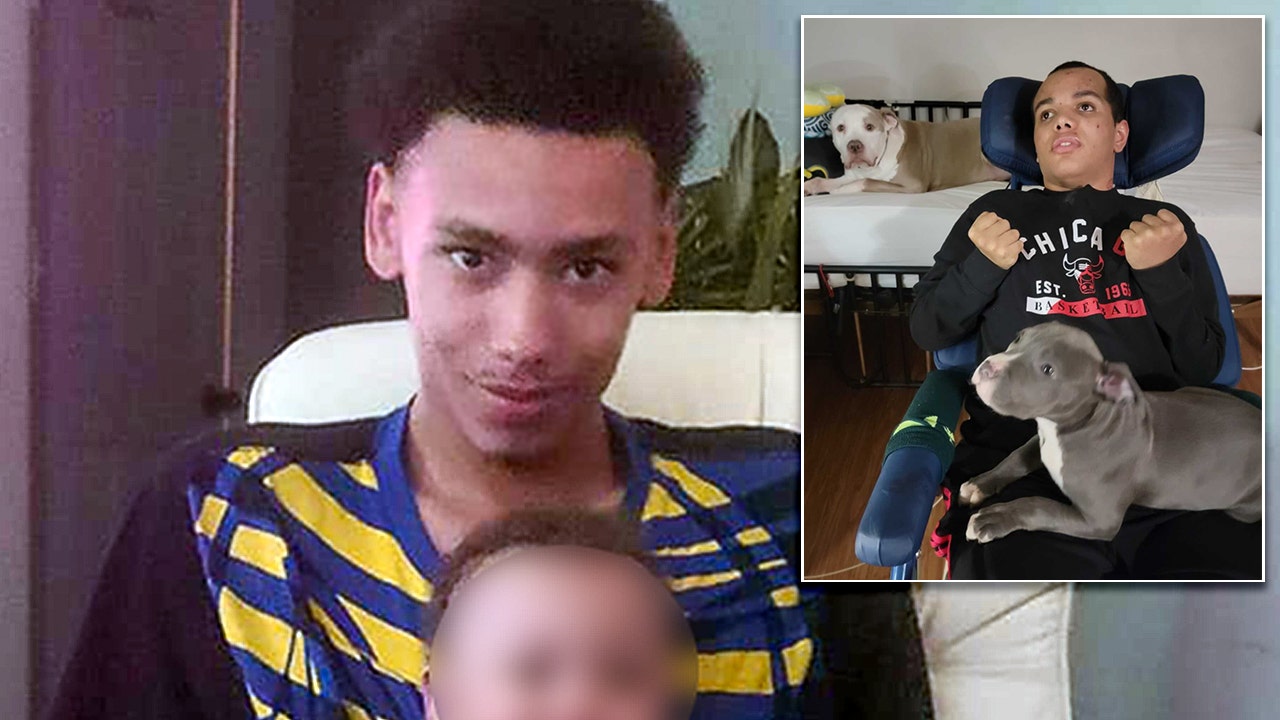 At around 9:19 p.m. CT on May 14, 2019, Caleb Livingston, then 16, suffered a single gunshot wound to the head outside the Full Stop gas station on Lowry Avenue North in Minneapolis, according to court documents. The gun was allegedly shot by Wright, who was fatally shot roughly two years later.

Livingston will be 19 next month but can no longer walk, talk or take care of himself. His mother and caretakers feed him through a straw and he breathes through a tracheostomy tube.

Livingston has three biological siblings and two adopted ones, she said. She’s a single mom, and he was her second child and firstborn son. Her oldest is 23 and her youngest is 12.

“He wasn’t perfect,” LeMay admitted of Livingston, but she said he had strong character growing up in Minneapolis, before the family moved away.

“He was that kid who would get off his bike to help an elderly lady carry her groceries to her front door because she was struggling,” she said.

Now he’s the one who needs help.

A person stands on a car near the Hennepin County Courthouse in Minneapolis Wednesday during a protest demanding “Justice for Daunte Wright.”
(Stephanie Pagones/Fox News Digital)

“Caleb is not able to handle his personal affairs or meet his basic living needs and has significant permanent disabilities both mentally and physically,” according to a lawsuit LeMay has filed against Wright’s estate.

LeMay had her faith in law enforcement shaken in July 2017, when a police officer arrived at her family’s home in response to an accidental triggering of their burglar alarm and shot their two dogs.

The incident prompted a lawsuit that is still playing out in court, and LeMay has questioned whether that played an impact in the investigation into her son’s shooting. The Minneapolis Police Department did not immediately respond to a request for comment.

Livingston and Wright had been friends at one point, LeMay said. And her son did his first sleepover as Wright’s home.

Caleb Livingston was 16 years old when he was shot in the head and severely injured. The attack left him mentally and physically disabled and suffering from unresponsive wakefulness syndrome.
(Jennifer LeMay)

But they fell out, for reasons LeMay said she does not know.

“The part that probably hurts me the most is that I still don’t have any explanation from anybody, not even from the Minneapolis Police Department,” she said.

She also said it was “really unfortunate” that Wright died during an arrest attempt earlier this year and that she would have preferred he faced the justice system for his alleged crimes.

“I certainly feel that if the judicial system and law enforcement had done what they were supposed to do correctly and diligently, that man would still be alive today,” she said.

On the other hand, she said she had no sympathy for Potter and that she believes the former officer had intentionally or negligently killed Wright.

Potter’s defense team has argued she meant to use her Taser on Wright and unknowingly drew and fired a pistol just inches away from his body.

Seven months after the Livingston shooting, Osseo Police charged Wright in connection with an armed robbery in which he allegedly held a gun to a woman’s head and choked her out. Those charges were pending at the time of his death on April 11, 2021, when police found he had a warrant in connection with another firearms case.

He had allegedly violated the terms of his release in the robbery case and was accused of waving a black handgun near a Minneapolis intersection before ditching it and fleeing on foot, eluding responding officers.

And in another posthumous lawsuit, a man named Joshua Hodges alleges that Wright was present when another man shot him in the leg – and the two stole his car.

“The audacity of this attorney is disappointing, and we implore members of the community to not be drawn in by these opportunistic efforts to tear down Daunte and hurt his family,” they said of Padden. “Ploys like these aim to do one thing: distract. But our team will not be distracted in our fight for justice in this case and in our fight for justice for all marginalized communities.”

As Wright struggled to evade arrest during the April stop, Potter warned him that she was going to hit him with a stun gun.

Then she fired a single, fatal round. The car hurtled down the street, then crashed. Wright died. A woman in his passenger seat, girlfriend Alayna Albrecht-Payton, suffered injuries.

A trial for first- and second-degree manslaughter is currently underway, and Potter faces up to 15 years in prison on the top charge.