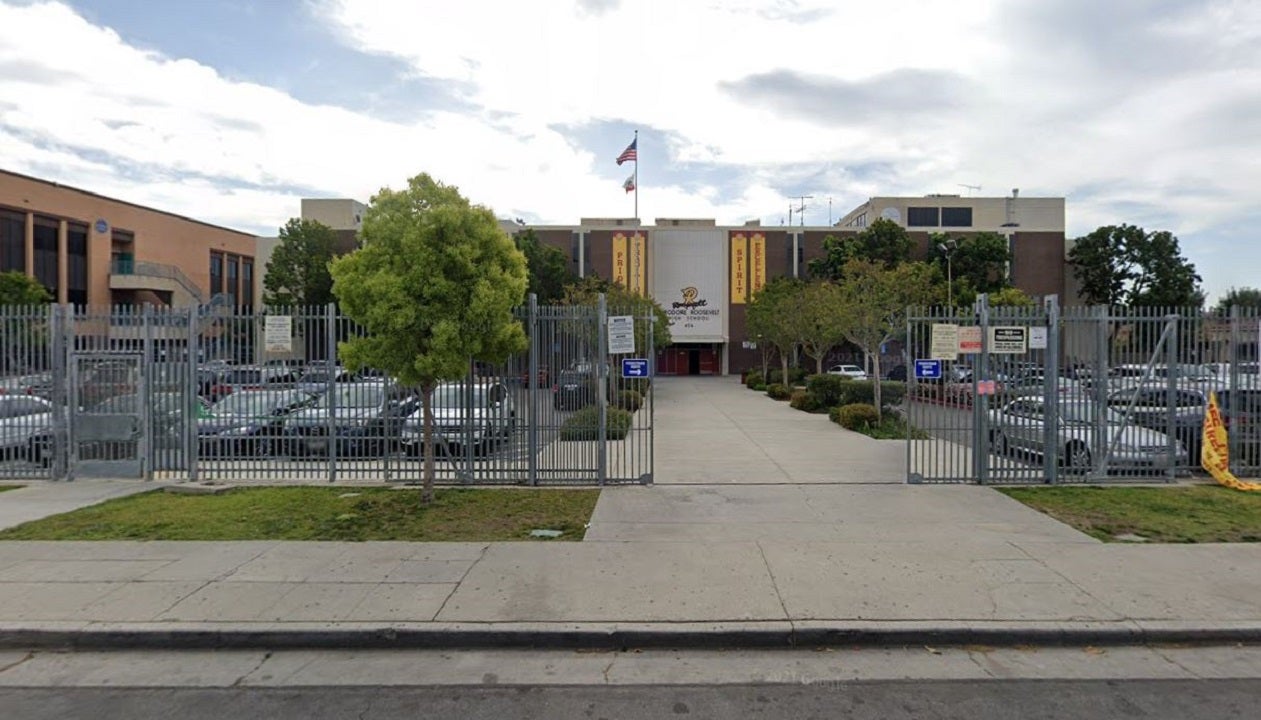 A teenage boy was shot and killed near a Los Angeles elementary school Tuesday, less than a day after a 12-year-old boy was killed and a 9-year-old girl was injured by gunfire.

One suspect was in police custody for an unrelated gun charge, police said. No motive for the shooting has been determined. The Los Angeles County Medical Examiner-Coroner identified the victim as 14-year-old Jeremy Galvin, who died at the scene.

Theodore Roosevelt High School in Los Angeles. A student was killed Tuesday, a day after a boy was killed and young girl was wounded by a stray bullet in another shooting.
(Google Maps)

“We are grief-stricken,” a joint statement from LAUSD board member Monica Garcia and Superintendent Megan Reilly stated. “With heavy hearts, we join the families in mourning over the tragic events of the past week. There are no words to express the pain, the sadness and anger so many of us are feeling at this time.”

The slaying came as Los Angeles continues to experience a crime wave of shootings and robberies.

On Monday, 12-year-old Alexander Alvarado was fatally shot while sitting in a car with a woman in the city’s Wilmington area. Two suspects approached the vehicle and opened fire, the LAPD told Fox News.

The 30-year-old woman was injured, and a 9-year-old girl was wounded when she was hit by a stray bullet. They were both hospitalized and expected to survive, police said. The department did onto disclose the woman’s relationship to Alvarado.

Los Angeles District Attorney George Gascon held a moment of silence for Alvarado during a Wednesday news conference, and the Los Angeles Police Protective League is offering a $20,000 reward for information leading to the arrest and conviction of his killer.

“This is more than a cold-blooded murder of a child and the shooting of his mother and an innocent young girl playing at an elementary school,” Craig Lally, President of the LAPPL said in a press release. “This is an attack on the sense of safety of all Angelenos; it rips at the very fabric of our society. We are offering this reward for information that leads to the apprehension and conviction of whoever is responsible for this cowardly act.”