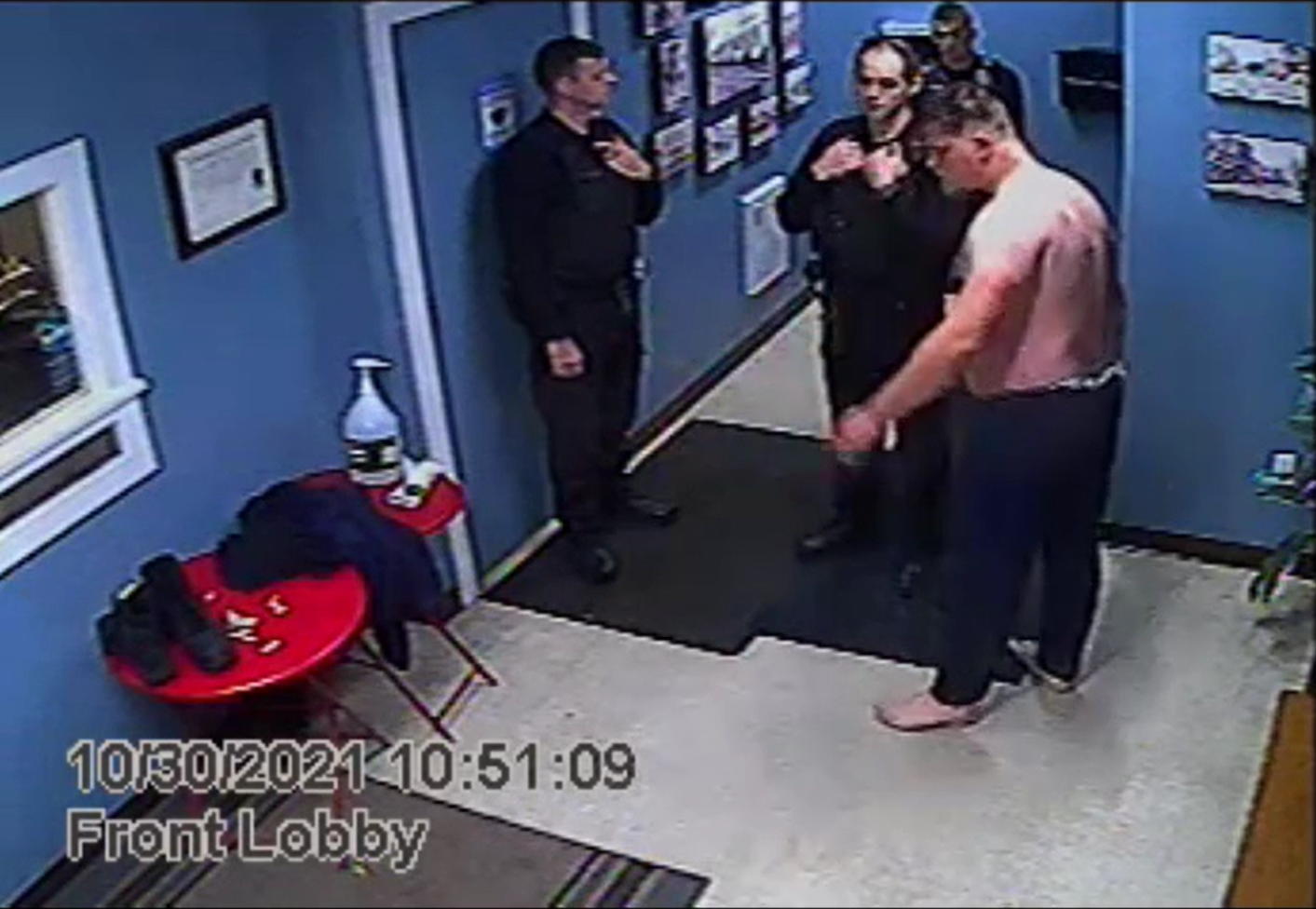 New York prosecutors have released surveillance video that shows the moment a Catskill man burst into flames when a police officer’s Taser ignited the hand sanitizer he had doused his upper body with moments before.

Jason Jones, 29, allegedly stormed into the police station on Oct. 30 and kicked off an argument with officers in the lobby, according to authorities.

More than six weeks after the incident, he died in a hospital, according to New York Attorney General Letitia James.

He tries to open a secured door and appears to be shouting, although the videos don’t include audio. At one point, he empties his pockets, throwing what appears to be a wallet, keys and cellphone down on a table in the lobby, and tears off his shirt. A moment later, he removes his boots too.

About 30 seconds into the second video, a visibly belligerent and allegedly intoxicated Jones grabs a jug of sanitizer off another table in the lobby and begins spraying himself over his head and upper body.

One of three officers in the lobby aims a Taser at him and says something before discharging the stun gun. Jones is off-camera at this time, but several seconds go by before a bright light appears in the bottom of the frame and the officers back up, with shocked expressions on their faces.

Jones then stumbles back into the picture, his head and shoulders engulfed in fire. He falls and the officers back off, fleeing the room. One of them peeks in around the corner as Jones’ hair smolders.

Jason Jones, 29, allegedly stormed into the police station on Oct. 30 and kicked off an argument with officers in the lobby, according to Catskill police.
(New York Attorney General’s Office)

By the time the rest of them return, just seconds later, the alcohol has burned off and Jones has red marks over his upper body. On his knees, he appears to go into shock but remains conscious.

Another person arrives, whose face is blurred out, and appears to administer aid.

Catskill police officers do not wear bodycams, but the station’s surveillance cameras captured the incident.

The Office of Special Investigations, a division of the state AG’s office, is looking into the incident because New York rules automatically trigger a special investigation after any officer-involved death. The investigation is ongoing.

New York state Attorney General Letitia James announces an investigation Thursday, a day after Jason Jones died in a hospital burn unit and weeks after he was allegedly set on fire by an officer’s stun gun. (Reuters)

The village police use-of-force policy requires officers to factor in “environmental conditions or exigent circumstances” before using anything “more than a firm grip.”

Police are also generally warned not to use their stun gun on suspects who are wet or standing in water.

Jones had been in the burn unit at State University of New York Upstate Medical University Hospital in Syracuse. An autopsy was expected to determine his official cause of death and how much of a role the stun gun incident played in it.