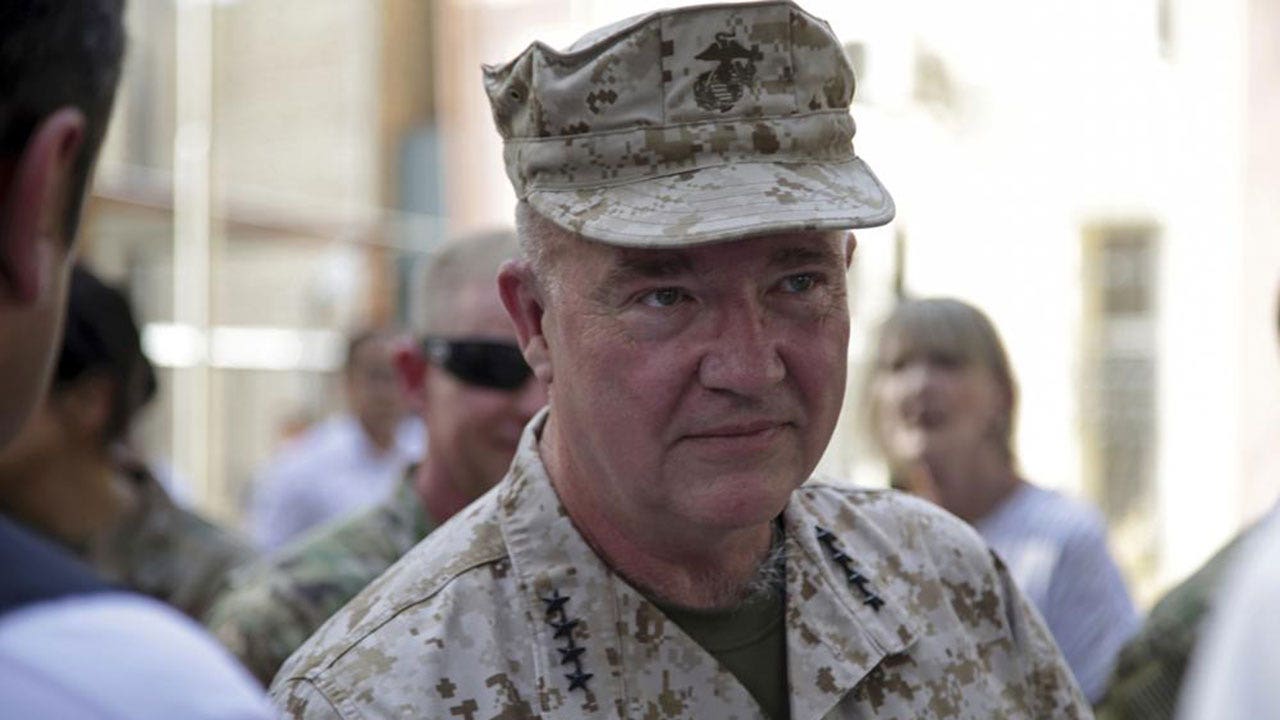 The top U.S. commander for the Middle East said Thursday that the United States will keep the current 2,500 troops in Iraq for the foreseeable future, and he warned that he expects increasing attacks on U.S. and Iraqi personnel by Iranian-backed militias determined to get American forces out.

Marine Gen. Frank McKenzie said in an interview with The Associated Press at the Pentagon that despite the shift by U.S. forces to a non-combat role in Iraq, they will still provide air support and other military aid for Iraq’s fight against the Islamic State.

Noting that Iranian-backed militias want all Western forces out of Iraq, he said an ongoing uptick in violence may continue through December.

Gen. McKenzie, commander of the United States Central Command, testifies before the House Armed Services Committee on the conclusion of military operations in Afghanistan and plans for future counterterrorism operations on Wednesday, Sept. 29, 2021, on Capitol Hill in Washington.
(Rod Lamkey/Pool via AP)

“They actually want all U.S. forces to leave, and all U.S. forces are not going to leave,” he said, adding that as a result, “that may provoke a response as we get later into the end of the month.

He said he believes Islamic State militants will continue to be a threat in Iraq and that the group will “keep recreating itself, perhaps under a different name.” The key, he said, will be to ensure that ISis not able to coalesce with other elements around the globe and become increasingly strong and dangerous.

America invaded Iraq in 2003, and at the peak point had more than 170,000 troops battling insurgents in the country and later working to train and advise Iraqi forces. All U.S. forces were withdrawn at the end of 2011, but just three years later, American troops were back to help Iraq beat back the Islamic State group, which had swept across the border from Syria to gain control of a large swath of the country.

The U.S. presence in Iraq has long been a flash point for Tehran, but tensions spiked after a January 2020 U.S. drone strike near the Baghdad airport killed a top Iranian general. In retaliation, Iran launched a barrage of missiles at al-Asad airbase, where U.S. troops were stationed. More than 100 service members suffered traumatic brain injuries in the blasts.

More recently, Iranian proxies are believed responsible for an assassination attempt last month on Iraq’s Prime Minister Mustafa al-Kadhimi. And officials have said they believe Iran was behind the October drone attack at the military outpost in southern Syria where American troops are based. No U.S. personnel were killed or injured in the attack.

“I think an attack to kill the prime minister is a pretty significant event,” McKenzie said. “I think that’s a signpost of the desperation that they’re under right now.”

FOLDS OF HONOR CEO ON ‘FOX & FRIENDS’: MILITARY FAMILIES ARE GETTING HELP THIS HOLIDAY SEASON

McKenzie, who has headed U.S. Central Command for nearly three years and traveled extensively throughout the region, painted a picture that reflected the recent upheaval in Afghanistan, where U.S. troops departed at the end of August.

On Afghanistan, McKenzie said the al-Qaida extremist group has grown slightly since U.S. forces left and that the ruling Taliban leaders are divided about their 2020 pledge to break ties with the group. He said the departure of the U.S military and intelligence assets from the country has made it “very hard, not impossible” to ensure that neither al-Qaida nor the Islamic State group’s Afghanistan affiliate can pose a threat to the United States.

Like the Taliban’s long campaign to get Americans out of Afghanistan, Iran and its proxies have battled to get the U.S. out of Iraq and the broader Middle East.

Iran, he said, believes that campaign won’t affect the nuclear negotiations that were long stalled but are now restarting. But, he said, “I think it’s a dangerous position for the Iranians to maintain, because I think they’re not going to be able to decouple those two things.”

McKenzie said that as NATO begins to expand its presence in Iraq as planned, the U.S. will refine its force there. And the total U.S. force presence will depend on future agreements with Iraq’s government.

The U.S. troops in Syria, currently numbering about 900, will continue to advise and assist Syrian rebel forces in the fight against IS, McKenzie said. He said it’s not clear how much longer that will be necessary but said, “I think we are measurably closer than we were a couple of years ago. I still think we have a ways to go.”

More broadly, McKenzie noted that the U.S. troop presence across the Middle East has significantly dropped since last year, when it peaked amid tensions with Iran, at as much as 80,000. The U.S. has identified China and Russia as the top national security threats, labeling China as America’s “pacing challenge,” and has looked to focus more effort and assets in the Pacific.

In its recent review of the positioning of U.S. forces around the world, the Pentagon said little about removing or repositioning troops in the Middle East. McKenzie and other top military leaders have long worried that the U.S. military is concentrated in too few locations in the Middle East and must disperse more to increase security.

“We think it is important to work with our partners in the region to present a more complex targeting problem to Iran,” he said, adding that U.S. will look at other bases and opportunities to move troops around to achieve that goal.

McKenzie said he is particularly concerned by Iran’s development of ballistic and cruise missiles as well as armed drones.

“And so those things are very concerning to me because they continue to develop them,” he said. “And they show no signs of abating in their research in this field, and their fielding of new and increasingly lethal and capable weapons.”