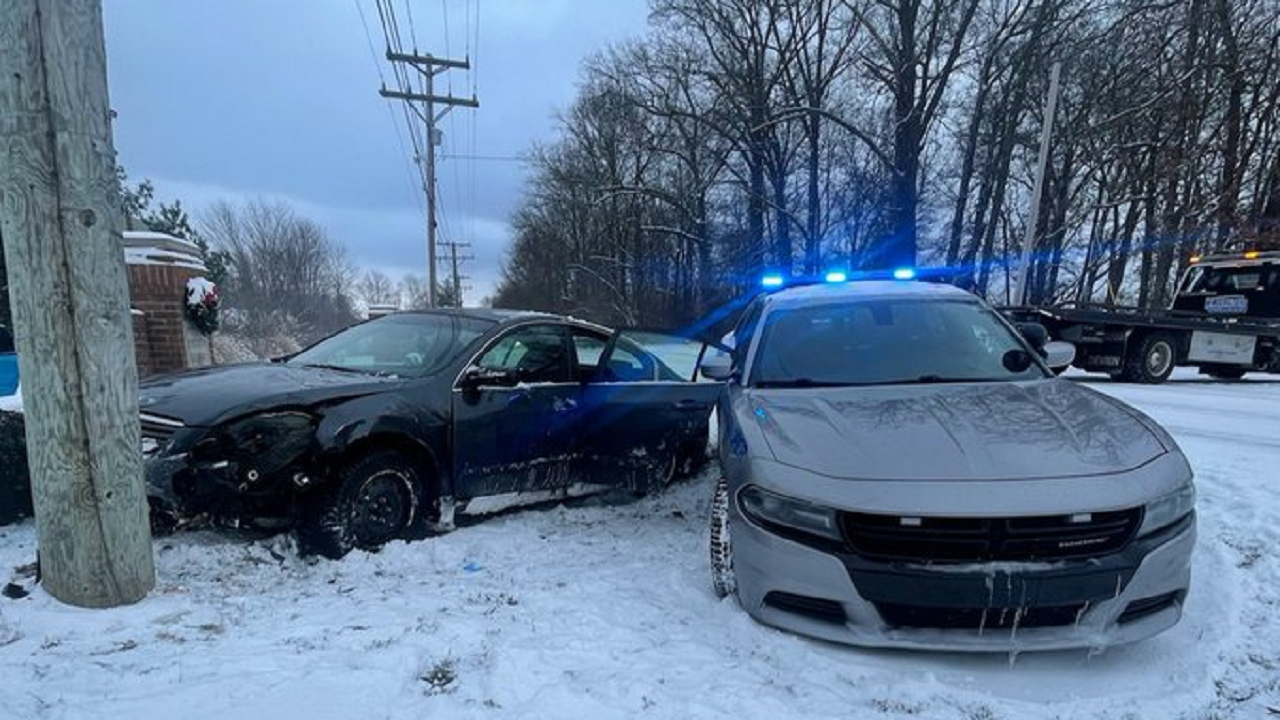 One person was killed in Tennessee and a trooper has been hospitalized in Kentucky after wintry weather caused dozens of crashes and sparked travel chaos across the Mid-South.

The developments come as Kentucky Gov. Andy Beshear is closing state office buildings for a second straight day Friday following the declaration of a state of emergency.

“All roadway surfaces will freeze. They are and will be extremely dangerous,” Beshear said in a statement. “I am closing all state office buildings with a public warning to stay off the roadways so roadway crews can continue plowing and clearing roads.”

The largest snowfall by Thursday evening in Kentucky was 8 to 9 inches in a swath from Elizabethtown to Bardstown and Nicholasville to Lexington, according to meteorologist Brian Schoettmer of the weather service’s Louisville office. Eastern Kentucky recorded 6 to 8 inches, and far western Kentucky had about 3 inches.

The Kentucky State Police says two of its vehicles were struck while officers were working separate accidents in Henderson County Thursday.

In the first wreck, an officer was standing outside his vehicle when another driver ran into its rear.

“You never know what’s on the other side of the hill… always be prepared to stop,” Trooper Corey King said in a tweet.

Five hours later, another trooper who was inside his vehicle while tending to an accident on Interstate-69 was “struck by another car who lost control on the ice,” King said.

That trooper is believed to have suffered a concussion and was taken to a local hospital, he added.

Elsewhere in Kentucky Thursday, up to 30 cars were reported to have been involved in a chain reaction crash along the Western Kentucky Parkway near Elizabethtown, leaving drivers caught behind it stuck for hours.

“You looked up, and cars were flying everywhere,” Jay Greene, a witness to the major accident, told WDRB. “I mean everywhere.”

However, no injuries were reported in that incident.

Some parts of Kentucky received up to 9 inches of snow. Here is the scene outside of a home in Winchester. (Courtesy Twitter/tinaren11905246)

Along the Kentucky border, authorities in Montgomery County, Tennessee, were dealing with dozens of crashes as well, including a wreck that killed one person involving a commercial vehicle on Interstate 24, Tennessee Highway Patrol spokesperson Lt. Bill Miller told the Associated Press.

Along Interstate-40, a truck overturned and struck a Tennessee Highway Patrol vehicle, according to WZTV.

Nashville saw 6.3 inches of snowfall on Thursday, shattering the city’s previous Jan. 6 record of 4 inches that had stood since 1977, the National Weather Service said. Freezing rain and sleet coated areas around the Tennessee-Alabama state border, said Scott Unger, a meteorologist for the service in Nashville.